Fine art wall hanging metal sculpture for sale. Sand cast bronze filigree with an antiqued blue green patina. Abstract concept art with a unique story. The symbol of  the Kaya’kau, representing the 3-tiered crown of High Empress Shī’Ba inside a geometric hex shape. This Sigil is from the introductory chapters of the Helstrom Universe. Visit www.WEIRDrpg.com to learn more and interact in the gaming metaverse.

You awake with start. It was all just a dream. You look around you and see the masses of dingy fur all huddled together even as the temperature is rising. It may be hot in this den, but at least in here it is safe. You are with your brothers and for the moment at least there isn’t an Ibabi in sight. You wish it was all just a bad dream, but you know the Sketh are very real. You shiver at the closeness of the memory. You wish you could fall back asleep, but this time into a peaceful dream world, full of milk and honey and a vast wild plain where you can run beneath the stars, alone and free. Instead, anxiety and near panic are again taking hold, and the cramping emptiness of your stomach is sending a desperate need to your brain. You want to eat. You need to eat. You are so very hungry. You tell yourself if you just do what Ibabi tells you to do there will be some food in your belly at the end of the turn. You look around at the sleeping forms. You smell the stale fear rising into the close air and the acrid smell of unwashed bodies. If you can get up now without waking anyone, chances are you will get to the water first while it’s still full and fresh.

what do you do?

Once a wise and prosperous race, the Kaya’kau sank into a Dark Age of propaganda and misinformation after war broke out between two feuding ideologies. During this time the male population, already seen as second class citizens, become repressed slaves who have no legal rights and are denied education. They are forbidden to read or write.

The Kaya’kau home planet Inati was hit by a stray asteroid many thousands of epochs ago. They had to flee or face distinction. They were taken in as refugees by the Tlikæ of the planet Fenri. For some time there were able to survive the challenges of exodus and live in harmony. But then the Tlikæ began to question Kaya’kau culture. In particular the caste system and the enslavement of males from birth. When Torr Lefwip began to inspire the males to rise up, a world war broke out. A war that ultimately destroyed the planet Fenri.

Now both races are redeeming themselves in the Dance of Āsā, and have formed an uneasy truce, but the Kaya’kau matriarchs still tell the cubs dark parables about the evil terrors of the Tlikæ…

Karina “Kitten” Harper is a mixed media fine artist that specializes in casting bronze filigree. Through object symbology she references forms, shapes and words that are already familiar and reinvents them to ask new questions about what they mean in modern day society.
This artwork is a part of the creative storytelling collection titled The Sigils of Helstrom. These symbols represent the different factions of the Helstrom Universe played through the WEIRDrpg: an immersive gaming metaverse based on the folk traditions and legendary creatures and characters of cultures all around the world. Since 2013 Ms. Harper has been collaborating with other artists, scholars, and scientists to bring the the future of meta gaming to life, and tell an allegory of our world’s diverse ethnic cultures. What unites us in common purpose, and what separates us as unique?
Learn more at www.WEIRDrpg.com 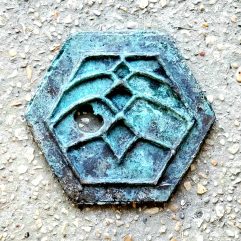