Fine art image of the sculpture Like a Fly by Karina K. Harper, standing in profile view. The lost wax cast bronze sculpture resembles a 3-legged spider with the leg bone anatomy of a human being. At the base of each leg is a polished bronze sharp claw. There are 2 bone arms that reach under the body of the spider. The spider’s skin is a dark black bronze patina with crusty aqua knuckles.

Like a Fly is a juxtaposition of the beautiful and the horrific. It is a combination of that which is both attractive and repulsive.

The form of the insect, with its diminuative complexity, glossy exoskeleton, and lithe grace, is a beauty of nature; however, the associations of filth, decay, and danger are hard to bypass. Fear and repulsion are natural reactions.

Death is also a natural part of life. It is beautiful because it stands as a constant reminder of the fragility of the human body. The complexities of its physiology must always be kept in balance. Dangerous forces exist everywhere to disrupt that balance, some sudden and violent, and others which tip the scale slowly. It is this emphemeral quality of human existance that makes it so precious.

The elongated legs with their dark glossy finish represent the lithe beauty of the spider. A creature that for all its beauty and complexity is hated and feared. The form of the legs and joints are modeled after the skeletal structure of the hips, shoulders, and limbs of the human body.

Each section was modeled in wax and then cast in bronze using the ancient technique of lost wax casting. These individual sections were then welded together and polished. To create a visual element of time corroding the body, a crusty patina was applied around the joints. The polished, sharp claws of the base add an element of tension and danger.

Inexorably, regardless of the risks or cautions taken, death eventually takes us all. Time becomes our nemesis. We must find the beauty of life in every moment before that moment passes and is lost forever.

The clock, while a literal representation of time moving forward, is also a metaphor of the passing of life toward death. The clockface plates have been pierced and polished by hand. The hour plate is copper; the numbers are represented by one to twelve strands of a spider’s web. The minute plate is silver, the abstracted line design reveals the life cycle of a rose, from promising bud to drooping wilt. The clock face has also been engineered in such a way as to loose 5 minutes for every hour. Because there are no numbers behind the minute and hour hands, but rather upon the plates themselves, which are moving in relation to eachother, what would have been an hour on the traditional clock, becomes 55 minutes when arranged in this fashion.

Like a fly caught in a spider’s web, we cannot escape the progression of time. 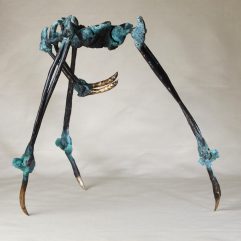